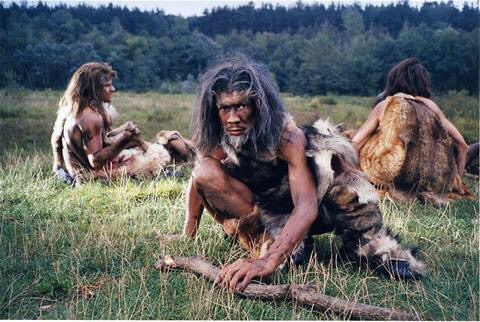 It’s the penultimate day of the challenge and I’ve still got stacks of cereal left over. I decide to use it up and make some cornflake cakes, a personal fave and popular with 9 year olds the country over. No surprise bogeys in mine though…

Post-breakfast and I watch on as Jane and Rob snaffle bacon sandwiches (my kryptonite) and instead I begin setting up the value chocolate in a bain-marie. Soon enough the kitchen smells of pork and chocolate, marvellous.

Impatient, I mix the chocolate and cornflakes together swiftly and shape before putting in fridge to cool. 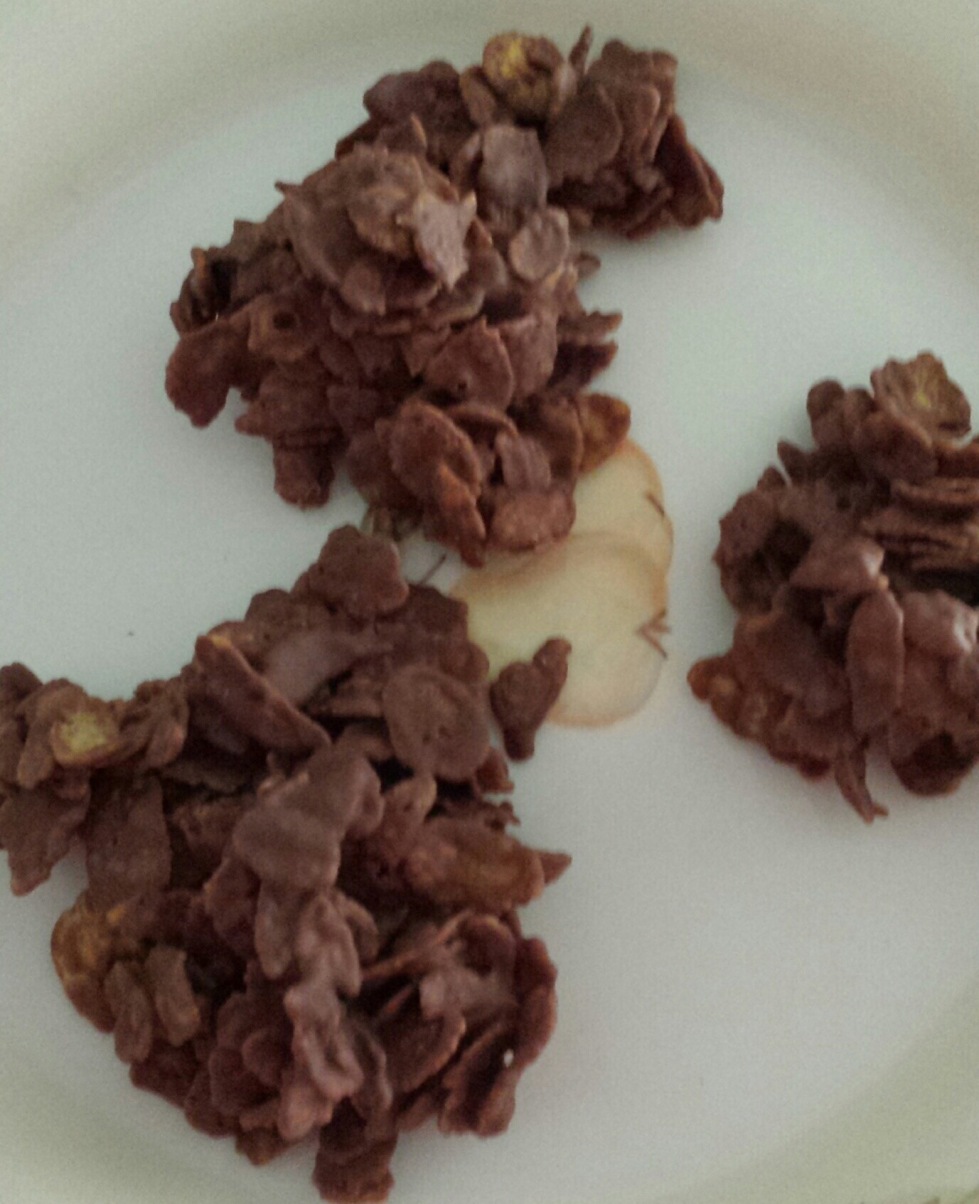 I eventually head off from the North at 1pm, it’s going to be tight getting to the Sunday reduced sections. I quickly Google supermarkets en route and most of them close at 4pm. I spot a Sainsburys with a 5pm finish and set coordinates accordingly.

I pootle along, singing loudly to Madonna’s immaculate collection and just as I’m getting into the groove I spy the green light of an Asda up a slip road.  A sneaky bit of lane hopping and I’m set on the detour…

Asda T-minus 30 minutes until close and it’s swarming in here. I politely enquire where the fresh reduced section is located and am escorted there by one of the staff. There are about 5 or 6 people already hovering over the guy with the sticker gun, watching intently as he marks down the items. I observe a short distance away as shoulder to shoulder they watch. No-one blinks.

The guy labels up 4 cucumbers and puts them onto the shelf. Boom! Within nano-seconds they’re gone. There’s no time for indecision at all, the strategy here is clearly snatch and review later at a safe distance. More cumberless than cumbersome, I leave the bun fight and wander to the bakery…

Nothing at the bakery except some doughnuts for 50p but I know I can do better. So I return to the fresh aisle and by this time the poor pricing guy has now scarpered and the gannets have dispersed. I lift up some of the empty boxes and spot a hidden packet of blueberries for 10p. Delighted to have scored a superfood, I also grab a solitary green and brown broccoli for 10p. It’s not my best hoard that’s for sure but the blueberries are a welcome find. 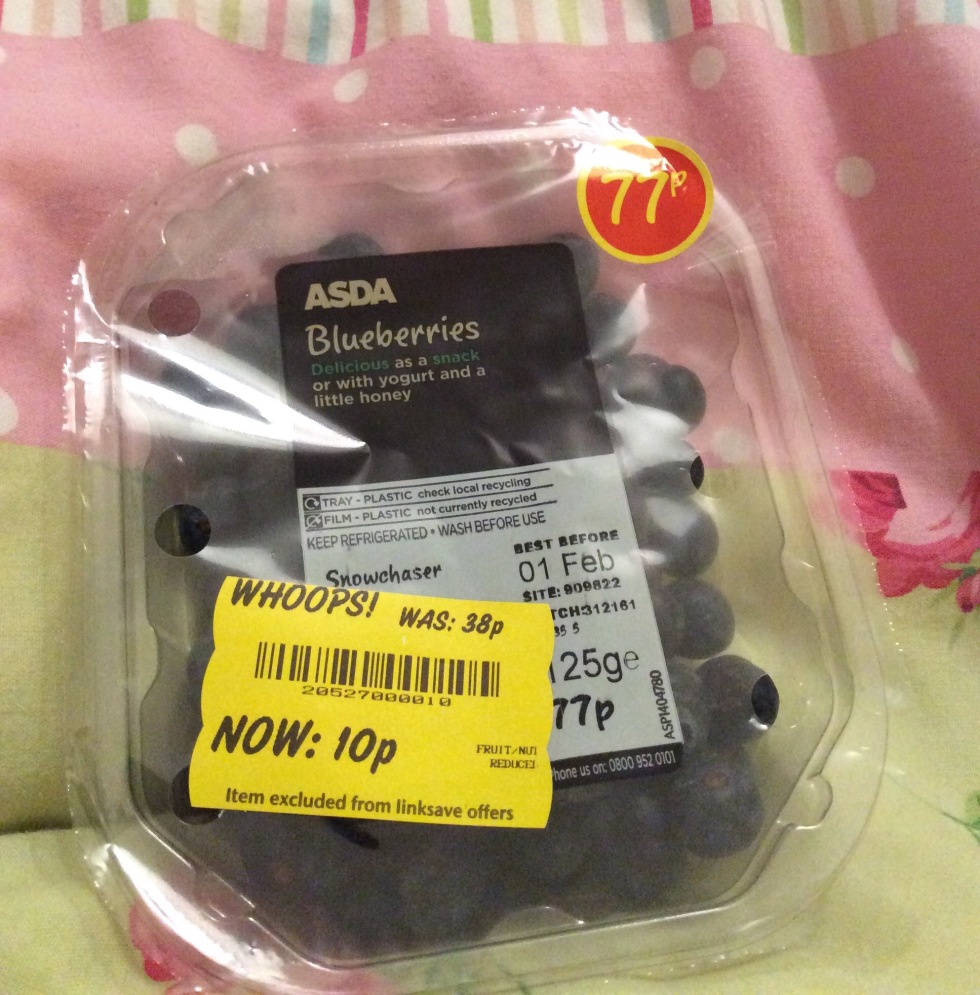 Off to the checkouts to settle up and en route I spy a trolley brimming with purely yellow stickered items… It’s a treasure trove on casters! I move in to take a closer look and spot four packets of mushrooms for 10p each, so I grab a packet and wander back to the check out. I hear someone shout “excuse me” but continue to walk, not even contemplating they might well be addressing me.

As I stand in the que for the self-service, I’m tapped sharply on the shoulder. I turn to face an angry looking lady gesturing to the mushrooms, she quickly informs me the trolley is in fact hers. I look down at the mountain of reduced items and am utterly flabbergasted that this is all for one person. I explain that given the volume I had assumed it had been placed there by Asda staff to which she does not comment. I apologise, give her back the mushrooms and she scoffs as she departs. One or two people in the que indicate their support by tutting loudly as the reduction hoarder scoots passed. No more is said.

Shroomless and cumberless, I return at last to the ranch from a busy weekend. Tired and with the whoopsie failure I make myself spaghetti hoops on toast. Cross at myself for having regressed to this standard, I consider the reality of pursuing this strategy is that it does not always lend itself well to a busy lifestyle. Whilst it’s the easiest way to get cheap and fresh ingredients, it’s also highly dependent on luck and timing.

I’m reminded of Black Friday and humanity at its worst. I recognise that more of us are becoming dependent on reductions in order to afford basic items and the whoopsie aisles have been an integral part of the challenge. I read about woman in LA who actually pepper sprayed fellow shoppers on Black Friday to get the bargains for herself. Maybe the hunter gatheress felt she had to resort to that extreme in order for her young back in the cave not to be presentless on Christmas Day. Who can say.  Either way, there remains a limited supply of reductions and an increasing demand. I’ve witnessed first hand that this arbitrary pricing system is capable of bringing out tribalistic tendencies in us all.

Skipchen illustrated the sheer volume of food discarded by supermarkets. Why is there not a greater resource allocated to providing more shelf side reductions? Do supermarkets not want us to become reliant on them? Do they fear we will all begin to begrudge paying full whack? Or do they simply not consider the margins worth the man power?

I’d like to know the answers to these questions.

Category: Alice is challenged to live on £1 a day