Entry 3: Back in Blighty

I’ve certainly found the challenge harder work since coming back to Blighty. One theory is that our American friends do not share the same hereditary social class system. “All men are created equal” (except perhaps the Canadians) as they say and as such greeting strangers and customers with a degree of assumed informality is much more commonplace and a less tricky exercise. Us Brits are inherently more snobby about who we let our guard down to. Familiarity has to be earned this side of the pond and as such it carries a higher weight. As the yanks dish it out more freely their friendliness can appear cheap and insincere and a little abrasive to our delicate dispositions… 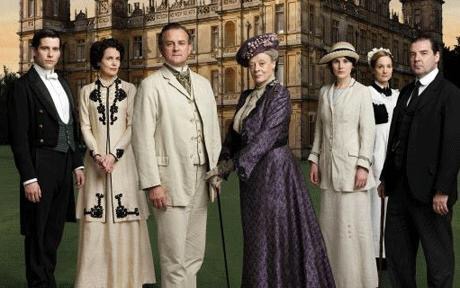 It seems that the supermarket aisles, whilst now a familiar stomping ground, aren’t the best places to spark up conversation. I loiter in the poultry aisle pointing at various offers and asking people “what are you cooking with that tonight?” only to be met with variations on the theme of “err… rice and veg I think” or “oh…um not sure” and a quick scuttle off.

I’m pleased to report no outright blankages but responses are all just enough to be polite without wanting to give the strange meat-curious sociopath any further encouragement. One man did launch into a graphic description of treatment in chicken farms, after which I felt so awful I fled the meat aisle and sought out something from Linda Macartney… 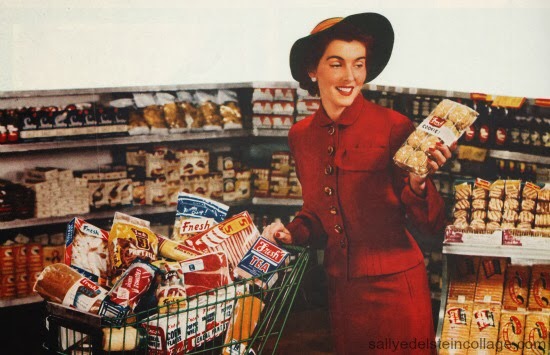 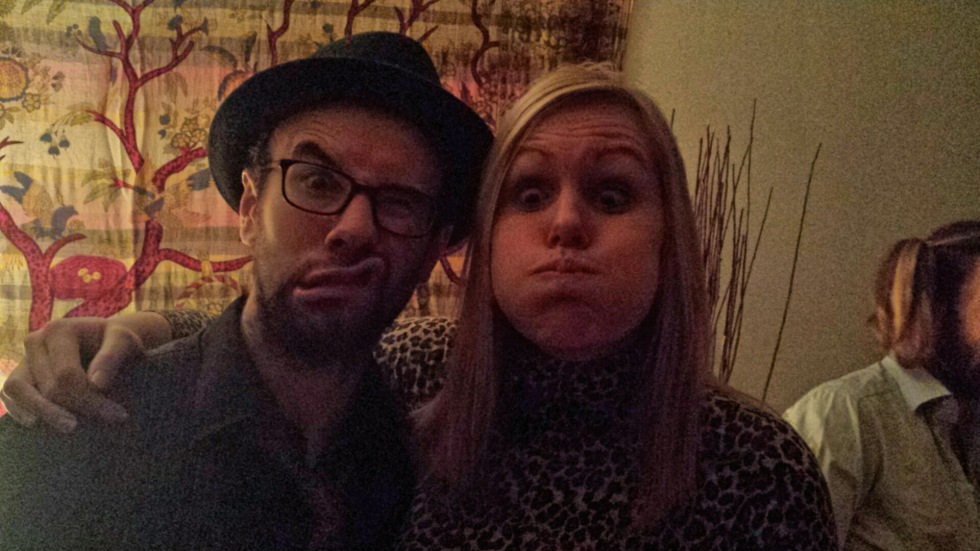 I meet Mike at my brother’s house party in Liverpool. The fancy dress theme is bad taste and it’s an environment designed to bring strangers together over their poor choice of garment so it’s something of a ‘gimme’ in the challenge stakes. Drink lubricates conversation and my attention is caught by a guy performing an improvised comedy sketch in the corner of the room. I make my approach and he compliments me on my hideous spray-on gold jumpsuit. We begin chatting and it turns out Mike has a colourful story to tell. Blind for a year of his life, Mike is something of a medical anomaly, having attended central school of speech and drama his vision has now returned and he is a budding playwright. Mike has written a satirical radio play which he is currently discussing with radio 4. It’s extremely dry humour and I laugh out loud listening to it hungover the next morning. Well and truly in the hurt locker. 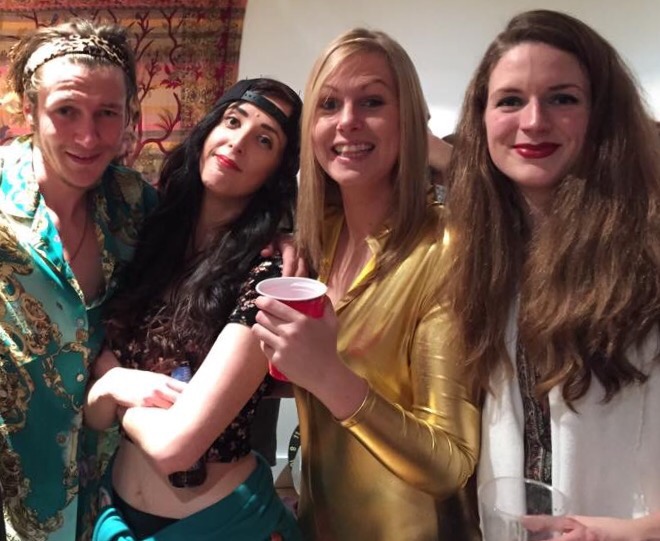 She who dares wins Rodney 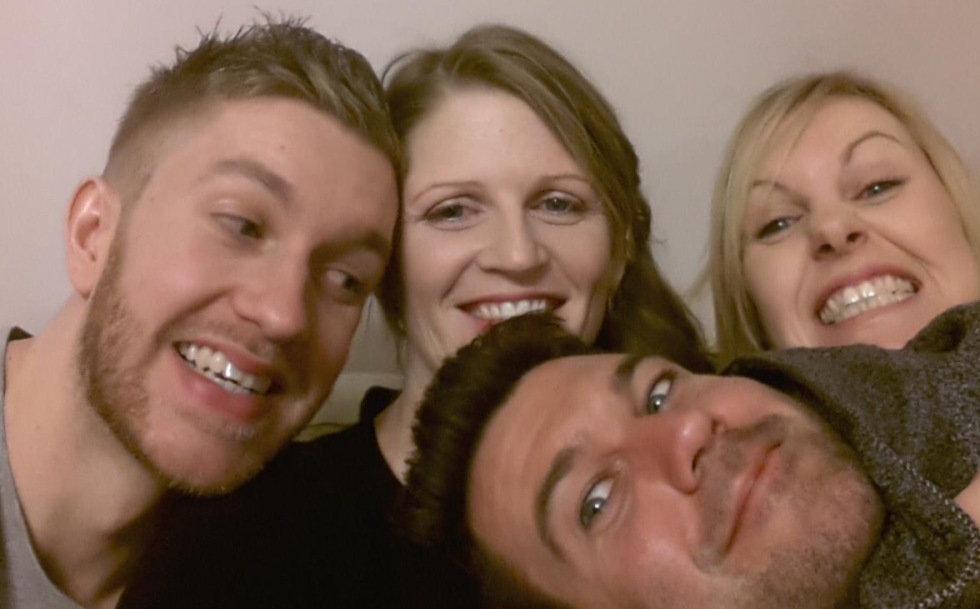 Valentine’s Day and my friends Jane, Andy, my brother Rob and I head to the lakes with the intention of climbing Helvellyn on Sunday in spirit of the new year’s challenge napkin. Andy’s mum, Judith, treats us to an enormous slap up dinner on arrival and we waddle down into Bowness village feeling single, swollen but satisfied…

Wanting to feel fresh for tomorrow’s ascent we agree on ‘just the one’. Matters deteriorate somewhat with deals on jugs of sangria and as the spanish poison flows, our inhibitions loosen. The bar is a washed up mix of rowdy singletons and couples supping in silence, with scowling females and sheepish males – the result of a clear failure to have booked anywhere in advance.

Finding this all rather amusing we proceed to bait each other into serenading the room with backstreet boys lyrics, each time with more gusto than the person before. As the night rolls on, we’re harmonising ‘I want it that way’ and have cleared the upper mezzanine.

If I’m going to befriend rather than alienate, it’s time for a change of tactics.

The danger of playing dares with people who:

a) have no shame;

b) will not back down; or

c) all of the above;

is that it usually ends excruciatingly for one of you and you just have to pray it’s not you. 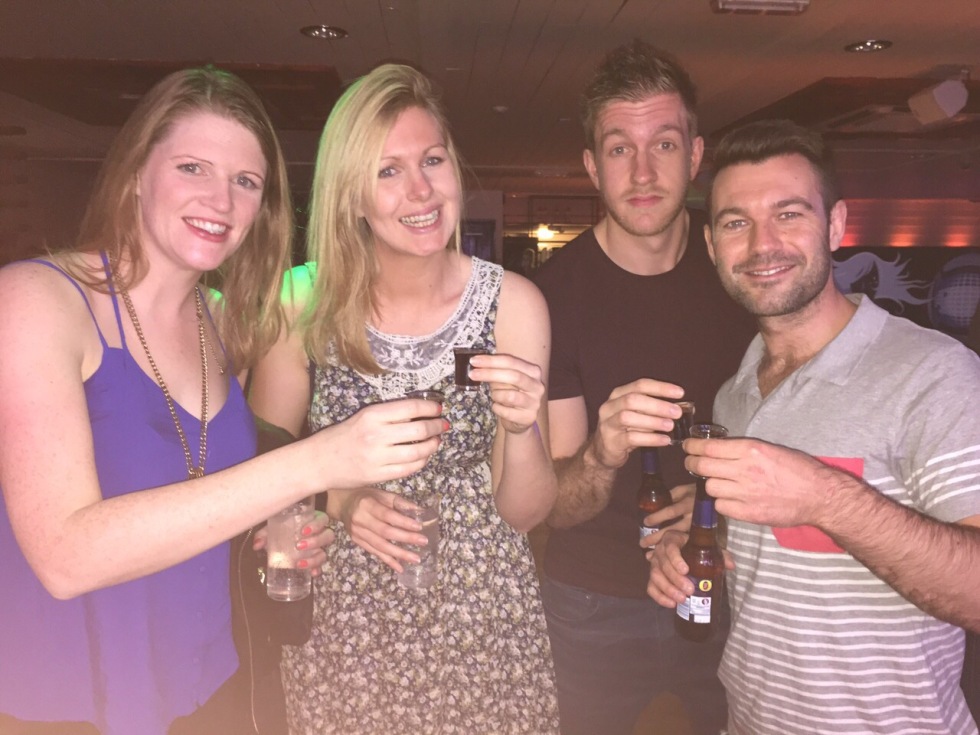 ﻿﻿The game starts fairly lightly, I am made to climb the pole on an empty dance floor and Rob commando crawls passed a packed seating area.

Things start to hot up as Jane is tasked with acquiring a birthday badge, she goes up to wish a young girl happy birthday before giving her a hug. The girl looks surprised but is chatty and receptive at first until Jane confides it is also her birthday but her friends didn’t buy her a badge. The girl smiles sympathetically but turns a tad possessive when Jane cringely asks if she can have hers instead. Suffice to say it was a technical fail but full marks for effort and execution.

Rob turns his trainer into a mobile telephone and wanders aimlessly about shoeless, putting it to his ear and trying to get signal. A girl he approaches to assist laughs initially but quickly becomes weirded out by the whole charade.

I score a till roll and pen from the barman and send Andy off to draw a stranger’s portrait and attempt to sell the artwork to them for £5. We watch in horror as our half pint sized friend skips up to a 6ft skinhead and gestures to the pen and paper. Surprised by our bonny wee friend’s choice of muse, the Ross Kemp lookalike nonetheless obliges. However with no faith in Andy’s artistic abilities and given Ross’ folic constitution – a black eye looks a real prospect and so we teeter on standby poised to swoop in if necessary. 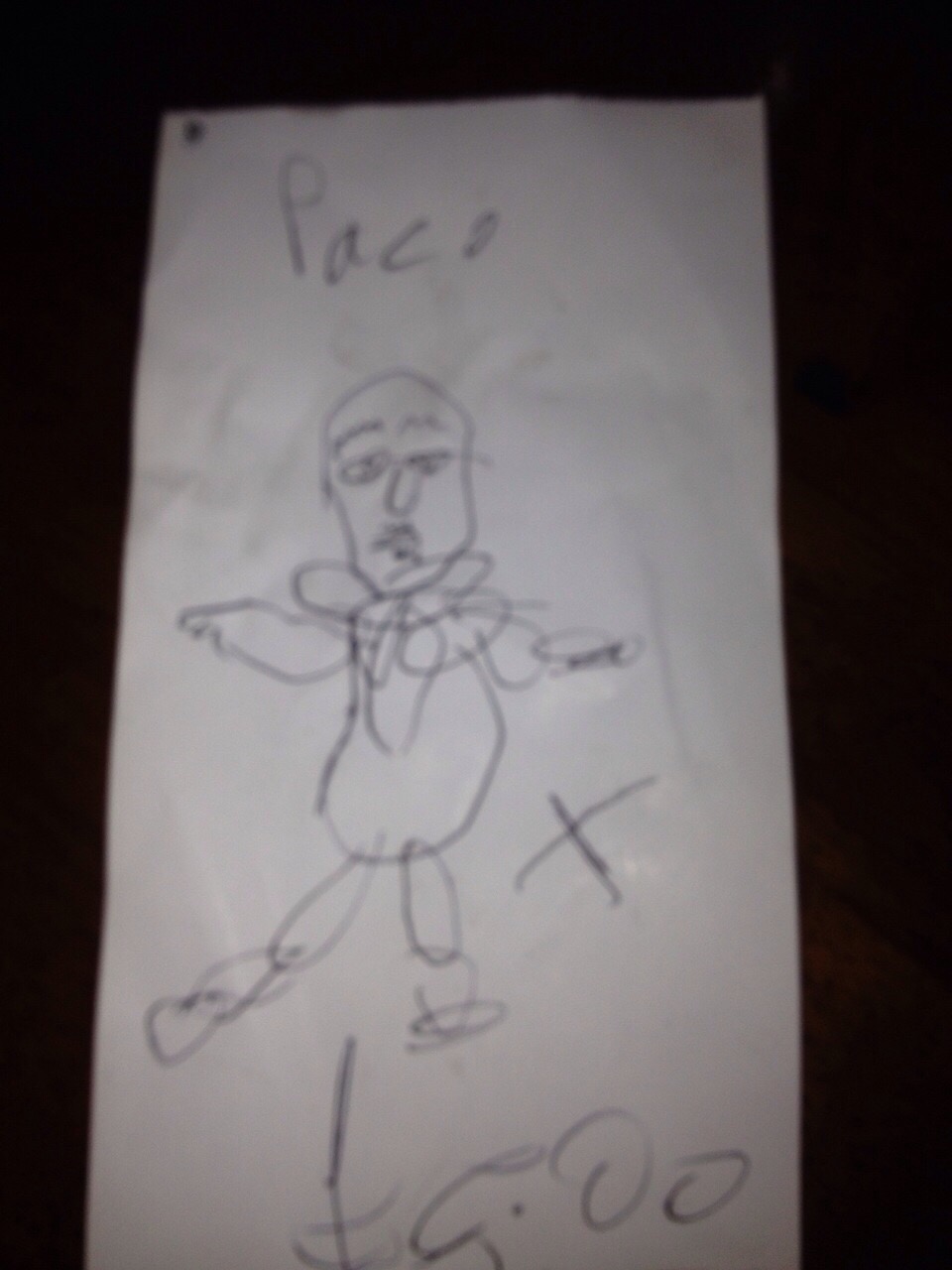 Our panic, it transpired, was entirely unnecessary. ‘Paco’ it seemed was quite pleased with Andy’s woeful effort and although he didn’t pay the £5 he thanked him kindly before sending Andy on his way, in the manner you might address a toddler proudly showing off a lego construction.

I’m tasked with challenging a stranger to a press-up competition. Marvellous. Not wanting to back down I set my sights on a burly guy in a shiny grey suit strutting his stuff on a (still fairly empty) dance floor. I sidle up to shiny guy and begin busting out Biggar’s finest shapes.

Shiny guy is called Alex, from Poland originally and now works at the bar part time and for a manufacturing company. Alex loves the lakes and the outdoors but is suffering with a back injury (not that this appears to be hindering some frankly illegal moves). My eyes drift over to my three puppet masters, motioning me to get on with it. There is a bit of a language barrier as I try to challenge Alex to a press up, mostly as I don’t think he can quite believe he’s understood me correctly.

Getting nowhere I resort to getting down on the floor and going for five, I manage three and blame the shortfall on a combination of Judith’s dinner and the sheer embarrassment. I gesture to the floor and Alex, now laughing, reiterates the convenient back injury. I declare myself the (hollow) victor and slink back to the puppet masters.﻿﻿

Dares with strangers and jaeger bomb justice rules in favour of a more gentler hike around School Knott as opposed to the heavy Helvellyn sentence. Alas for another day. 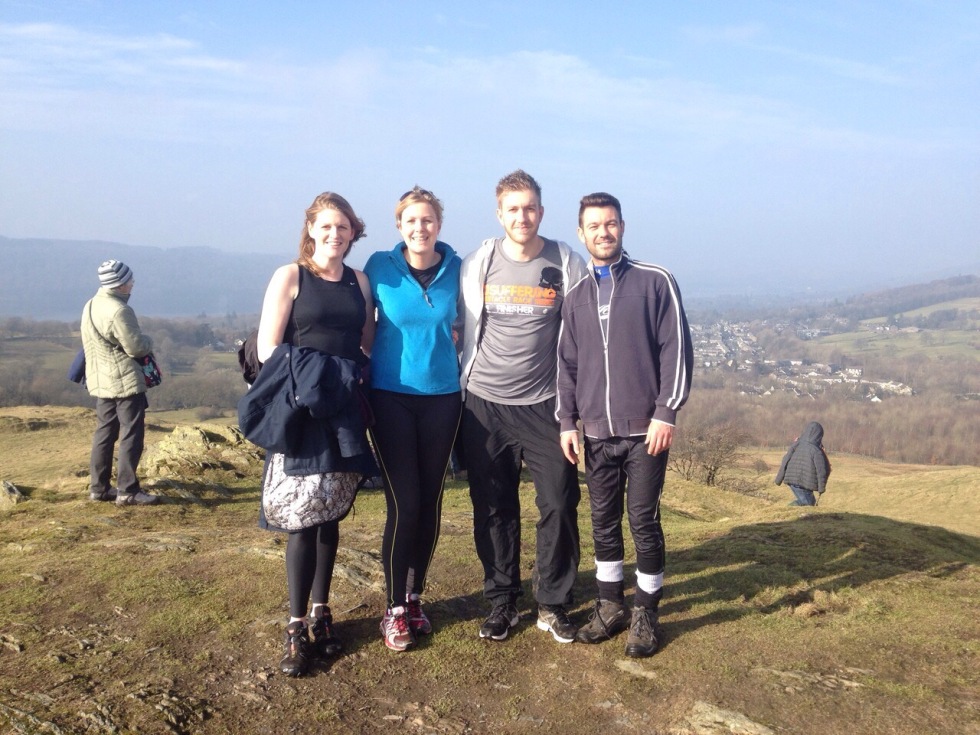 My oldest friend is coming to visit from Bristol and weather is supposed to be a mixed bag so I drop her a quick whatsapp to say:

Clearly not enamoured by the prospect of an outdoor activity, I drag a reluctant Sian to Go Ape for a casual death defying treetop assault course. We meet Katie, a bright enthusiastic climber, who has been working at the centre for four years. Katie gains our trust quickly and with her expertise on the harnesses we put our safety in the hands of someone we’ve met in the last ten minutes. It all comes good and despite a crisis of faith at the tarzan swing, she gets us both round by shouting encouragement from the safety of terra firma.﻿﻿ 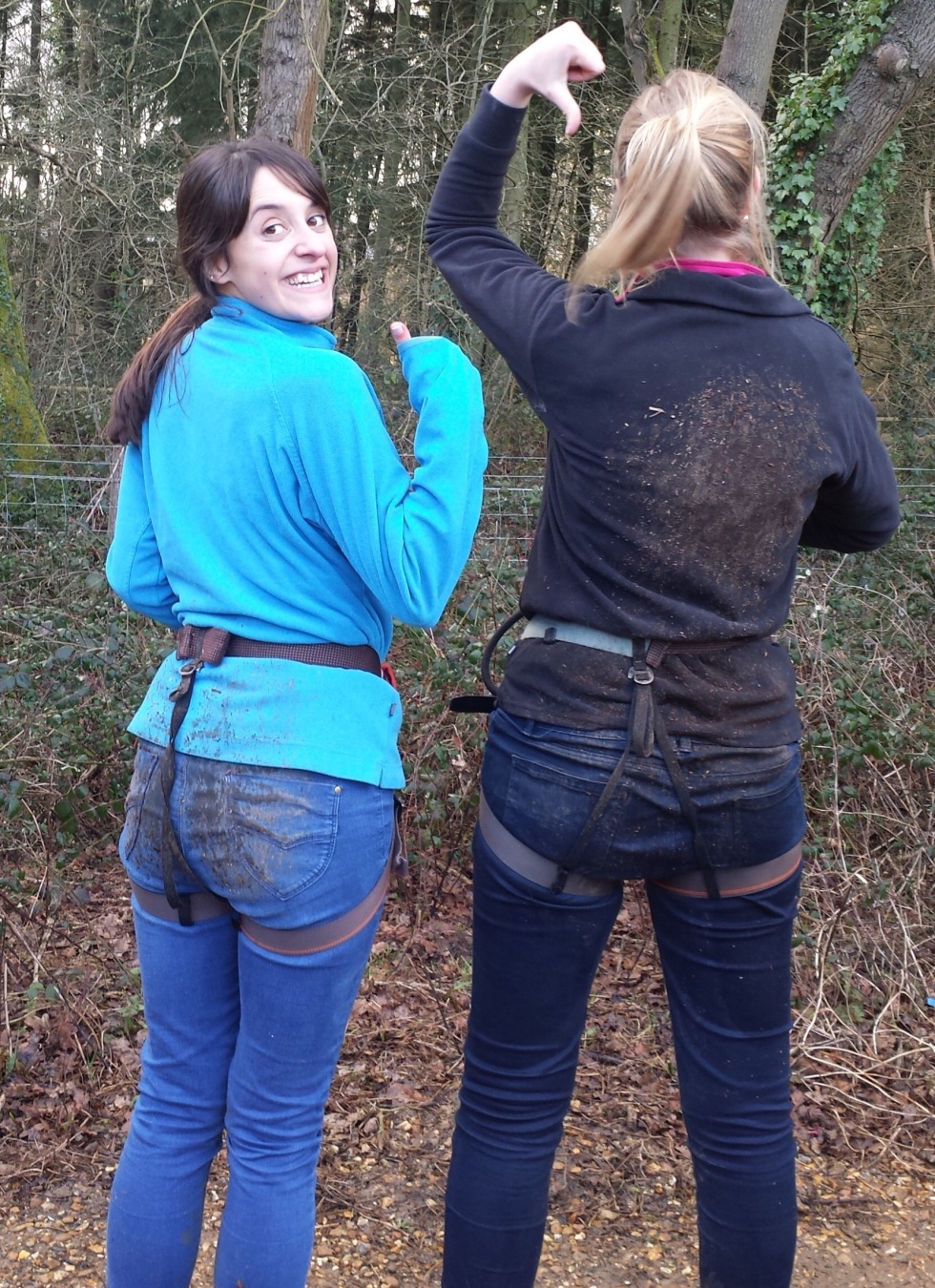 I know. We bluddy rocked those fleeces.

You’ve got a friend

Sunday and Sian and I head to the New Forest with the rascally Dexter in tow. White dog quickly turns brown in all the puddles as we meander from Beaulieu down the forest trail. A quick pub pit stop at Bucklers Hard and we head back in direction of the ranch.

Out of the pub we step into a deluge. Hoods down, brollies up, we battle forth but our path is soon cut off by the high tide of the Beaulieu river and we have reached an impasse. An elderly bearded gentleman warns us “you shall not pass!!”

(ok I may have paraphrased a little there). 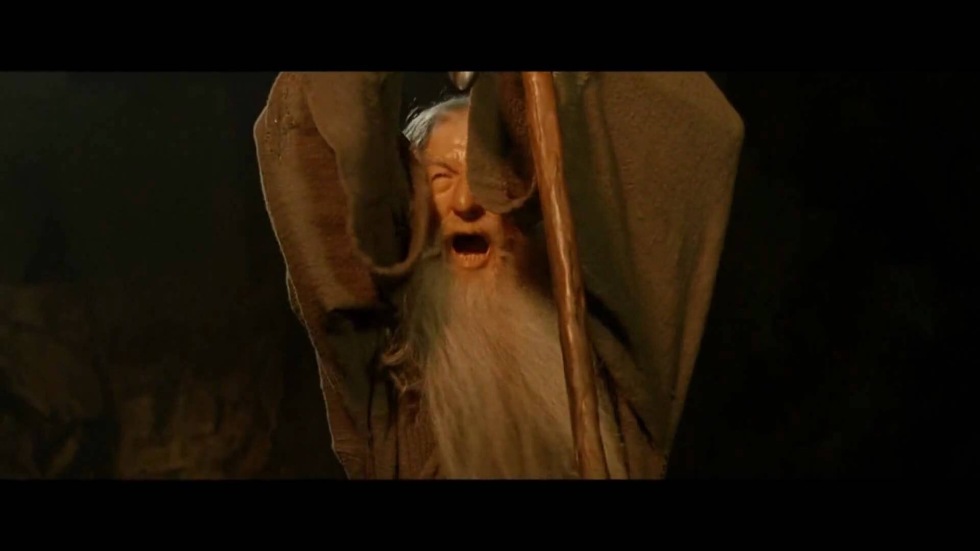 Forced to double back from whence we came, weary and sopping and defeated by the path. We must instead take the main pass east and hold this course to the west of the misty mountains, passing through many a dangerous land before arriving at Beaulieu. Onwards hobbits.

Together we drudge along the main road, Dexter has shrunk in the wash and now resembles a pocket sized sheep and this seems more and more like a poor idea. A mile into the hike and a car pulls up next to us, a young guy with a kind face leans out the window to offer us a lift. I can see Sian eyeing up the situation with some apprehension. I recognise this could be a bit dodgy and I’m certainly not advocating the practice in general. However given that there’s two of us in raincoats with a soggy dog and he looks decent, I decided to put my faith in people and good deeds. In any case I give Sian little time to object before I’ve grabbed Dexter and hurled him into the back. ﻿﻿

﻿We thank our rescuer profusely, particularly given that there is now a sodden animal on his backseat. It turns out Kev’s grandmother also has a bichon frise and he clearly isn’t phased by the paw prints. Dexter looks on out the window particularly pleased to be warm and dry as we chat to Kev who lives locally. We fill Kev in on our misfortune at being marooned at Bucklers Hard and he assures us we’re not the first before kindly dropping us back at the car. We thank him again for getting us safely back and wish him well. 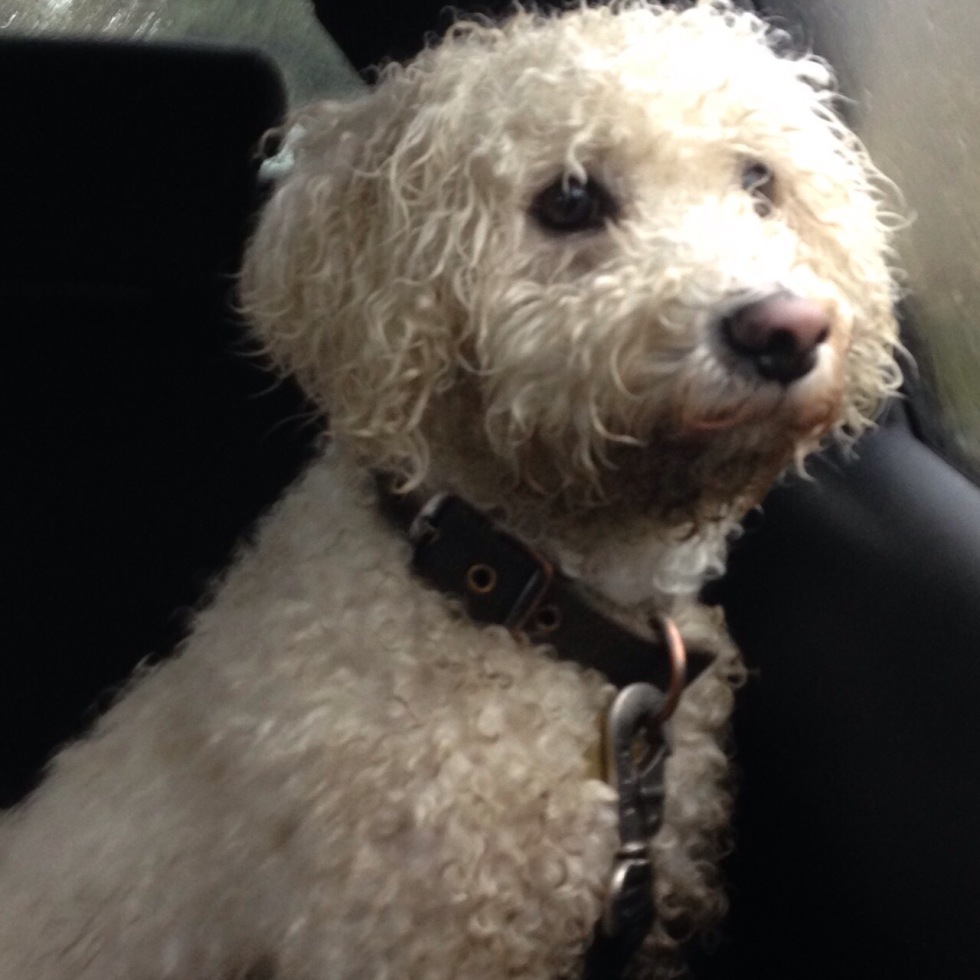 Top of the pops

It’s been an interesting period for surprises and rebuffs, other notable strangers include:

Category: Alice is challenged to befriend a stranger every day